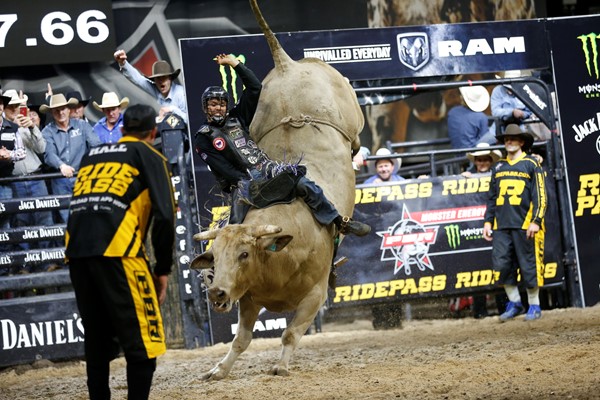 With just eleven weeks remaining in the season, Lachlan Richardson has put injury and mid-season form slump behind him to record back to back Top-5 finishes and remain in the hunt for the 2019 PBR Australian National Championship.

The 26-year-old consolidated his No. 4 ranking in the standings with a morale-boosting third-place finish at Newcastle earlier this month. It was a crucial return to form for Richardson after injury, and a buck off streak caused him to fall several places in the standings.

“You work hard at it every single day of the week, and then the results don’t show it, it annoys you but makes you hungry for next week. I had a bit of bad luck there for a bit, but you just got to keep working at it,” he said, as he prepared his bull rope for competition at Burnett Heads.

“Confidence is a really big thing in this sport, and I feel good and healthy and ready to go”.

Richardson went on to add a fifth-place finish at the Burnett Heads Touring Pro. He is one of just two riders to make up ground on the No. 1 ranked Aaron Kleier, in the 2019 PBR Australian National Standings over the past month of competition. The gap between the two riders sits at 1565 points.

Earlier this season, the Gresford bull rider was flying high after covering twelve of the fourteen bulls he faced. He charged up the PBR Australian National Standings leaderboard into second place following April’s Touring Pro Division event in Julia Creek.

During the impressive stretch, which began following his individual seventh-place finish at the 2019 PBR Global Cup in Texas, Richardson went on to cash cheques at six of his next seven starts.

Richardson bucked off his next ten bulls in PBR Australia competition, slipping to fourth place in the standings. The unwanted streak lasted the better part of 4 months.

But in a return to form at the 2019 Newcastle Invitational, Richardson produced an outstanding performance finishing 2-for-3 and in the process, posted the highest ride score of the night with 88-points.

“It’s always important to get out of one of them streaks, but it only takes one, and yeah, I’d had a bad run there for a little bit, I had good draws and done my job, nearly anyway. I rode two. I just need to finish them off and keep looking forward.”

Compounding his form slump was a concussion which he suffered in his Round 1 matchup at the Rockhampton Touring Pro in May. It was an injury that forced Richardson to miss two significant events on the Monster Energy Tour, the PBR Origin in Sydney and Last Cowboy Standing in Brisbane.

Richardson says he was disappointed to miss the June run of events but believes he will benefit from the break as the season progresses.

“I turned out last minute [for Last Cowboy Standing]. I still had some symptoms of the concussion, and you have got to look after your head.”

“It’s a long year yet, and I just have to keep staying on and be consistent,”

“The few weeks off probably, in the long run, did me better, because I felt healthy and ready to come back,” he added.

Richardson, who remains in search of his first win of the year, has posted nine Top-10 finishes on the PBR Australia tours from just 17 events. He has been working hard on both the mental and physical aspects of bull riding as he looks to score his first buckle of 2019.

2019 was the first season in his professional bull riding career, that Richardson did not embark on a Summer Run through the USA and Canada. He says he has been enjoying his time at home in Australia, adding that he has appreciated the lifestyle changes that come with being at home.

“It’s good to be home. It wears you out being over there [in the USA] your whole life, so I’m happy to be home for a bit,” Richardson said.

“Compared to normal, it’s a lot different because I’m busy and always doing something. Before you would go to the gym, or you might be travelling to the next bull ride. I didn’t work or anything, so it’s a totally different lifestyle.”

“I enjoy working and doing fun stuff on the farm, and I get to live with my fiancée. So, all that stuff’s good and life’s good, just a little bit different from what I’m used to.”

The seven-time PBR World Finals qualifier had encountered visa issues earlier this year which prevented his return to the USA, but with the issues now rectified, Richardson has not ruled out a tilt at an eighth trip to Las Vegas.

The former No. 16 ranked bull rider in the world is currently ranked 52nd in the PBR World Standings and 245 points behind No. 35 Scottie Knapp with ten weeks remaining until the 2019 PBR World Finals.

“Before I couldn’t leave Australia, now I can, so whenever I want to do some more events, I can get up there and go do a stint and qualify.”

Richardson gets a chance to make up ground in both races this weekend when the PBR Australia Touring Pro Division heads to Cunnamulla.