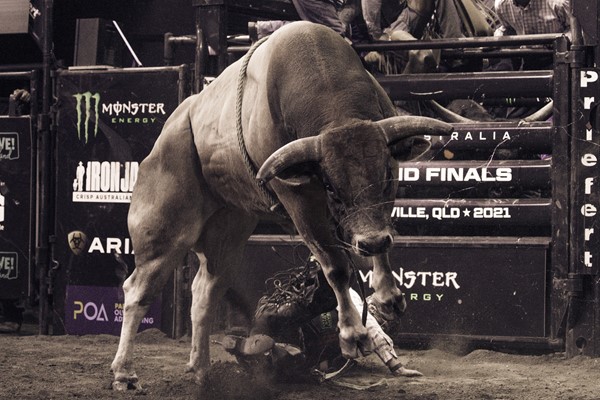 This evening, we kick off the new PBR Australia season with two rounds of Monster Energy Tour bull riding inside the arena at the Great Western Hotel in Rockhampton.

The field is full of emerging talent on both sides of the draw, so we should learn a lot tonight. Many of the riders are returning to competition after a year or two away, while a handful will be making their tour debuts. On the bull side daysheet, we will see a new stock contractor make their debut plus some new bulls from some of the best trainers in the business.

It should be a great event. Let's breakdown some matchups:

View the daysheet for the first stop of the 2022 PBR Australia season.

Brady Fielder on Rifleman (BK Bucking Bulls)
The Clermont cowboy finished the 2021 season with a strong result at the Grand Finals that pushed him up to the No. 2 spot in the rankings, and he should be able to carry that form through to the new season. Rifleman has only been out twice in PBR Australia competition, and he is yet to be ridden. On both occasions, he has turned back to the right in the gate and got the better of the left-handed opponent early. Fielder should get a much better start with the bull expected to turn back to the right and into his hand, and that should result in a qualified ride.

Sam Woodall on Meet Ya Maker (Keliher Bucking Bulls and MJ Bucking Bulls)
Woodall rode three straight bulls to end last season, and he picked up the Grand Finals Aggregate, sealing the deal with an outstanding 90-point effort aboard POA Fully Locked and Loaded. I would expect him to be healthy and full of confidence to begin the new year. He starts his night against Meet Ya Maker, who has been covered five times in his eleven trips at this level. The bull should turn back into his hand. With the average score on this bull worth 83.60 points, a qualified ride from the Heywood talent will set him up to contend for another event win.

Kurt Shephard on Maverick's Quicksilver (Blackhall Livestock)
We welcome Peter Blackhall and his team to the tour. Maverick's Quiksilver is a big grey bull who makes his PBR Australia debut tonight. I have seen this bull a few times on social media. He kicks high and hard, and he prefers a clockwise spin. Shephard didn’t finish off last season as he would have liked, and I think that will make him extra hungry here. This bull will turn back away from his left riding hand, but the Mareeba cowboy's last three qualified rides of the 2021 regular season came aboard bulls that turned back to the right.

Brady Fielder on Ariat's Ol' Son (Dunne Bulls)
Ariat's Ol' Son looks to be another nice draw for Fielder. He has met up with this bull twice previously in the PBR Australia arena, and they have taken home a win each. The bull scored a 4.31-second victory at Airlie Beach back in 2020, while the 2019 PBR Australia Rookie of the Year was marked 86-points to pick up a round win here inside the Great Western late last season. The bull has been mostly out and around to the right in his twelve career PBR Australia trips, with one other rider able to make the whistle. That will put him into Fielder's hand, and I think they can combine for another qualified ride.

Michael Smith on Roam Aviation's High Risk (Dunne Bulls)
We didn't see much of Smith on tour last season, but his form on the rodeo circuit was pretty good, and he has looked strong in the practice pen in his preparation for this event. Roam Aviation's High Risk has been ridden four times on tour for an average of 84.06 points. These two matched up twice during the 2020 PBR Australia season, with the bull coming away with wins in 4.95 and 2.38 seconds. He will leave the chutes and turn back to the right once again. That puts him into the Tully bull rider's hand, and I think Smith can regain the form that saw him contend for the Rookie of the Year buckle back in 2018.

Qynn Andersen on Shotgun (ST Bucking Bulls)
Andersen put together an encouraging rookie campaign, and I think we can expect him to improve his consistency early in his second year on tour. He gets a nice opportunity to start things here against Shotgun, who has been ridden in three of his last five trips. Two of those scores belong to right-hander Beau Willis with the latest 85-point effort good enough for a round win at Caboolture last season. This bull used to turn back to the left, but we have seen him make the turn to the right in his past three trips. This matchup should be great, and I think the bull's new choice of direction will tip the odds in the Koumala young-guns favour.