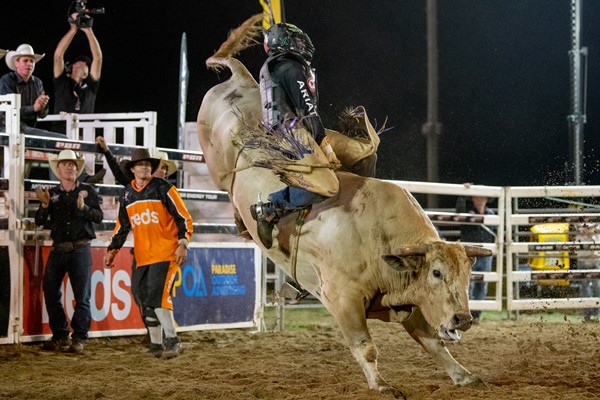 Throughout the 2020 season, fans, and viewers around the globe on RidePass, were treated to high-scoring rides as Australian’s finest battled it out for the league’s national championship.

Locked in a fierce battle for the title throughout the entirety of the season, Aaron Kleier and Lachlan Richardson were embroiled in a heated race that came down to the final day of the season. While injury ultimately denied Richardson the opportunity to earn his first PBR Australian Championship, the rides that fueled the back-and-forth battle between the two fierce athletes were nothing short of electric.

Today we look back at the Top 5 rides from the 2020 PBR Australia Championship, all of which were logged by Kleier and Richardson.

Tying for the fifth highest-marked ride of the 2020 season was an 88.5-point score, logged three times, twice by Kleier and once by Richardson.

Getting the year off to a hot-start, now three-time PBR Australia Champion Kleier first recorded the high marks at the season-launch tour stop in Tamworth, New South Wales. Rebounding from a Round 1 buckoff aboard Rockslide, dispatched in 3.12 seconds, the Queensland-cowboy went the distance aboard POA Palooka for 88.5 points to win Round 2. While he was unable to continue the momentum in the championship round, bested by Bezerk, Kleier finished fourth overall at the Tamworth Iron Cowboy to earn early national points in his quest for his historic third consecutive national title.

Nearly 11 months later, Kleier replicated his 88.5-point score, this time in Bundaberg, Queensland, at the second event in the double-header tour stop. Competing in his home state, the ride punctuated a seemingly unstoppable weekend for the Queensland sensation, which began with a third-place effort at the opening event where he went 1-for-2, recording a score which would tie for the second-best ride of the season.

As the Bundaberg Invitational wound to a close, Kleier opened the event with an 86-point score on Cattle King Ray Ban, architecting a rematch with POA Lock n Load in the championship round. Having met once prior, the Dittmann Bucking Bulls’ bovine athlete got the better of Kleier at the 2018 PBR Australia Grand Finals, bucking him off in 3.04 seconds. Reversing fortunes, Kleier made the 8 for a massive 88.5 points and was propelled to his first event victory of the year.

Marking the first PBR event on Australian soil in more than six months, Richardson was quick to pick up where he left off, reaching the championship round of the opening event in the double-header after covering Tiger King for 77 points in Round 1. Drawing Big Buck Hunter in the championship round, Richardson faced a familiar opponent, having covered the bull for an 88-point score in Newcastle, New South Wales in August 2019.

With the showdown once again leading to fireworks, Richardson again made the whistle atop Big Buck Hunter, this time scored 88.5 points en route to a runner-up finish.

While Richardson and Big Buck Hunter’s first matchup in 2020 led to the fifth-best score of the season, their subsequent meeting would result in what would tie for the second-best ride score of the year.

Roughly one month later, the duo of athletes again found their names across from one another’s, this time in the championship round of the second installment of the double-header in Beaudesert, Queensland. Entering the tour stop’s final round atop the leaderboard, Richardson first won Round 1 when he covered Going Under for 86 points.

As the last man to leave the chutes on the grounds of the Beaudesert Showgrounds, Richardson once again made the requisite 8, this time marked 89 points. The perfect 2-for-2 showing, elevated the Gresford-native to his third event victory of the year, and allowed him to extend his lead over then No. 2 Kleier in the national standings to 80 points.

Bookending the tour stop in Beaudesert, Kleier delivered his own 89-point score in both Bundaberg and Airlie Beach.

In Bundaberg, Kleier won Round 1 of the opening event when he covered Flyin Hippie for the impressive score. At the final regular-season tour stop of the year, Kleier again earned the head-turning score, this time aboard POA Fully Locked & Loaded.

The 8-second effort in Airlie Beach helped earn Kleier his fourth event victory of the year, but more importantly allowed him to leapfrog Richardson in the national standings.

While he began the event No. 2 in the nation, he exited Airlie Beach No. 1 in Australia with a 56-point lead over Richardson.

While the 2020 PBR Australia season was filled with its twists and turns, the high-marked ride of the year was witnessed early, seen in Ballarat, Victoria in early March.

As the Ballarat Stampede got underway, Richardson began the event with an 80-point score on Mind Games in Round 1 to reach the championship round. Remaining perfect, and recording just the third qualified score of the tour stop in which the bulls dominated, Richardson covered The D.O.C. for a monstrous 89.5 points.

RELATED: Richardson Lights up Ballarat and Leaves as New Aussie No. 1

“There is not much better than coming down here and getting the win on good bulls like that,” Richardson said during the buckle presentation. “I work hard every single day of my life to come out here and do it in front of good crowds like this.” “It felt great. [The D.O.C] is a good little bull.”

Earning the event win, Richardson netted a critical 77 national points and surged from No. 5 to No. 1 in the early national standings.

Relieve these moments, and more, on-demand on RidePass. Watch all the 2020 PBR Australia Monster Energy Tour events at RidePass.com or via the mobile app.